A standard pregnancy multivitamin satisfies the daily requirements of most pregnant women. Well-nourished women may not need multivitamins to meet these daily requirements, but in the absence of a careful evaluation by a nutritionist it is prudent to recommend them. Folate supplements are recommended prior to conception and throughout the first trimester to help prevent neural tube defects. A standard pregnancy multivitamin contains the recommended amount of folate.

Iodine is an essential mineral obtained from the food we eat. While seafood is a good source, the amount of iodine in other foods, such as vegetables and milk, varies depending on where it is grown or how it is produced. Over the past 10 years there has been a re-emergence of iodine deficiency in Australia and New Zealand, with nearly half the population thought to have inadequate iodine intakes. Iodine is an essential nutrient needed by humans in very small quantities. The thyroid, a small gland in the neck, uses iodine to produce thyroid hormones. These hormones are vital to ensuring the normal development of the brain and nervous system before birth, in babies and young children. For this reason, it is very important that pregnant and breastfeeding women get enough iodine. Mild to moderate iodine deficiency can cause learning difficulties and affect physical development and hearing.

In 2009 the Australian Government mandated that all salt used in food manufacture (except organic bread) contain iodine. However, because pregnant and breastfeeding women have the greatest need for iodine, the National Health and Medical Research Council (NHMRC) recommends that all women who are pregnant, breastfeeding or considering pregnancy take an iodine supplement of 150 micrograms each day. Make sure your pregnancy multivitamin contains this amount of iodine.

Women with pre-existing thyroid conditions should seek advice from their endocrinologist before taking an iodine supplement.

Some studies have shown a possible link between high levels of caffeine intake and miscarriage and impaired fetal growth. Caffeine is found in coffee, tea, cola, chocolate and certain energy drinks. It is advisable to limit caffeine consumption to less than 200mg per day – ie: 2 cups of ground coffee or 4 cups of medium-strength tea, hot chocolate or cola per day.

Seafood is a great source of protein and omega-3 fatty acids, and should be eaten 2-3 times per week. However research has shown that some types of seafood – particularly large, predatory fish – may contain higher levels of mercury, a naturally occurring element found in air, water and food. Fish take up mercury from streams and oceans as they feed. Large, predatory fish often have higher levels of mercury as they eat smaller fish containing mercury.

Babies developing in the womb seem to be most vulnerable to the effects of mercury on their nervous systems and it may slow their development in the early years. Research is ongoing but pregnant women should be selective about the types and amounts of fish they eat during pregnancy. It is advisable to eat less shark, ray, swordfish, barramundi, gemfish, orange roughy, ling and southern bluefin tuna. Also limit tuna steaks to one portion per week, or two 140g cans per week (the smaller tuna used for canned tuna contains less mercury). There is no restriction needed on the amount of salmon (including canned salmon), prawns or shellfish that can be eaten.

The information contained is not meant to replace medical advice.  Should you have any questions or concerns regarding your health, please contact your health care professional. 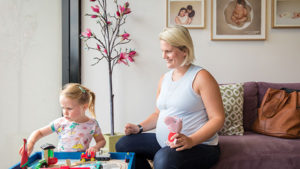